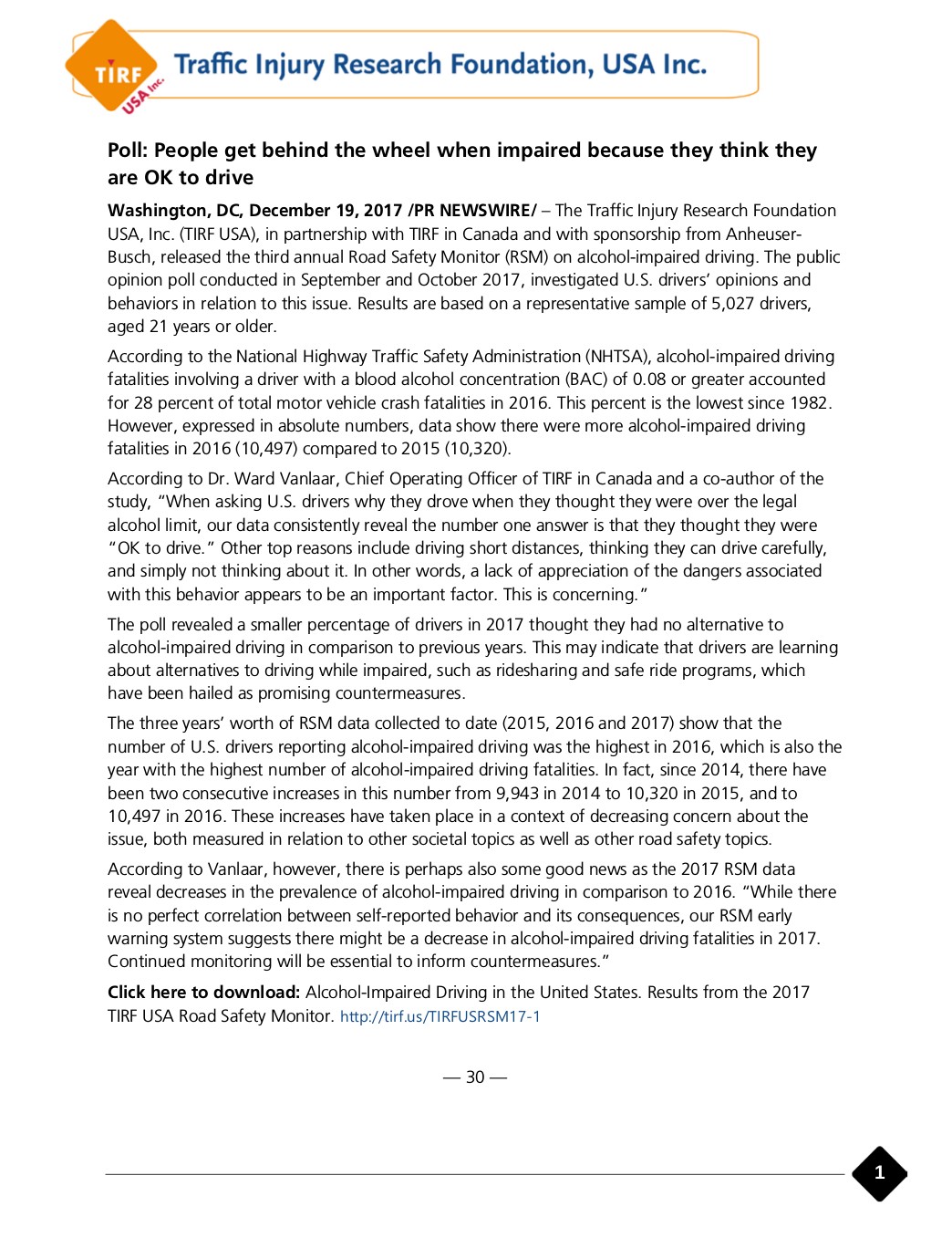 Washington, DC, December 19, 2017 /PR NEWSWIRE/ – The Traffic Injury Research Foundation USA, Inc. (TIRF USA), in partnership with TIRF in Canada and with sponsorship from Anheuser-Busch, released the third annual Road Safety Monitor (RSM) on alcohol-impaired driving. The public opinion poll conducted in September and October 2017, investigated U.S. drivers’ opinions and behaviors in relation to this issue. Results are based on a representative sample of 5,027 drivers, aged 21 years or older.

According to the National Highway Traffic Safety Administration (NHTSA), alcohol-impaired driving fatalities involving a driver with a blood alcohol concentration (BAC) of 0.08 or greater accounted for 28 percent of total motor vehicle crash fatalities in 2016. This percent is the lowest since 1982. However, expressed in absolute numbers, data show there were more alcohol-impaired driving fatalities in 2016 (10,497) compared to 2015 (10,320).

According to Dr. Ward Vanlaar, Chief Operating Officer of TIRF in Canada and a co-author of the study, “When asking U.S. drivers why they drove when they thought they were over the legal alcohol limit, our data consistently reveal the number one answer is that they thought they were “OK to drive.” Other top reasons include driving short distances, thinking they can drive carefully, and simply not thinking about it. In other words, a lack of appreciation of the dangers associated with this behavior appears to be an important factor. This is concerning.”

The poll revealed a smaller percentage of drivers in 2017 thought they had no alternative to alcohol-impaired driving in comparison to previous years. This may indicate that drivers are learning about alternatives to driving while impaired, such as ridesharing and safe ride programs, which have been hailed as promising countermeasures.

The three years’ worth of RSM data collected to date (2015, 2016 and 2017) show that the number of U.S. drivers reporting alcohol-impaired driving was the highest in 2016, which is also the year with the highest number of alcohol-impaired driving fatalities. In fact, since 2014, there have been two consecutive increases in this number from 9,943 in 2014 to 10,320 in 2015, and to 10,497 in 2016. These increases have taken place in a context of decreasing concern about the issue, both measured in relation to other societal topics as well as other road safety topics.

According to Vanlaar, however, there is perhaps also some good news as the 2017 RSM data reveal decreases in the prevalence of alcohol-impaired driving in comparison to 2016. “While there is no perfect correlation between self-reported behavior and its consequences, our RSM early warning system suggests there might be a decrease in alcohol-impaired driving fatalities in 2017. Continued monitoring will be essential to inform countermeasures.”

About the poll. These results are based on the 2017 TIRF USA RSM, an annual public opinion survey developed and conducted by TIRF USA, in partnership with TIRF in Canada. A total of 5,027 U.S. drivers aged 21 years or older completed the poll in September and October of 2017. Results can be considered accurate within plus or minus 1.4 percent, 19 times out of 20. The data were stratified and weighted by sex, age, and region. The majority of the questions were answered using a scale from one to six where six indicated high agreement, concern, or support and one indicated low agreement, concern, or support, as well as numerous yes/no questions. All respondents completed the survey online.

About TIRF USA. The mission of the Traffic Injury Research Foundation USA, Inc. (TIRF USA) is to develop and share the knowledge that saves – preventing injuries and loss of life on American roads, reducing related social, health and insurance costs, and safeguarding productivity. TIRF USA is an independent road safety research institute that obtained 501(c)3 non-profit status in the U.S. in 2014 and is affiliated through an exchange of services agreement with TIRF in Canada, established in 1964. Visit us online at www.tirf.us or twitter.com/tirfusainc

About Anheuser-Busch. Anheuser-Busch and its employees build on a legacy of corporate social responsibility by focusing on three key areas: promoting alcohol responsibility, preserving and protecting the environment and supporting local communities. In the past three decades, Anheuser-Busch and its wholesalers have committed more than $1 billion in national advertising campaigns and community-based programs to encourage responsible drinking and prevent underage drinking and drunk driving. Anheuser-Busch reduced total water use at its breweries 32 percent over the last 5 years and by 45.5 percent over the last 10 years. The company has been a leading aluminum recycler for more than 30 years. Since 1997, Anheuser-Busch and its Foundation have invested in local communities through donations of more than $573 million to charitable organizations. The company also has provided more than 76 million cans of emergency drinking water to people impacted by natural and other disasters since 1988. Based in St. Louis, Anheuser-Busch, the leading American brewer, is a wholly-owned subsidiary of Anheuser-Busch InBev, the leading global brewer. For more information, visit www.anheuser-busch.com