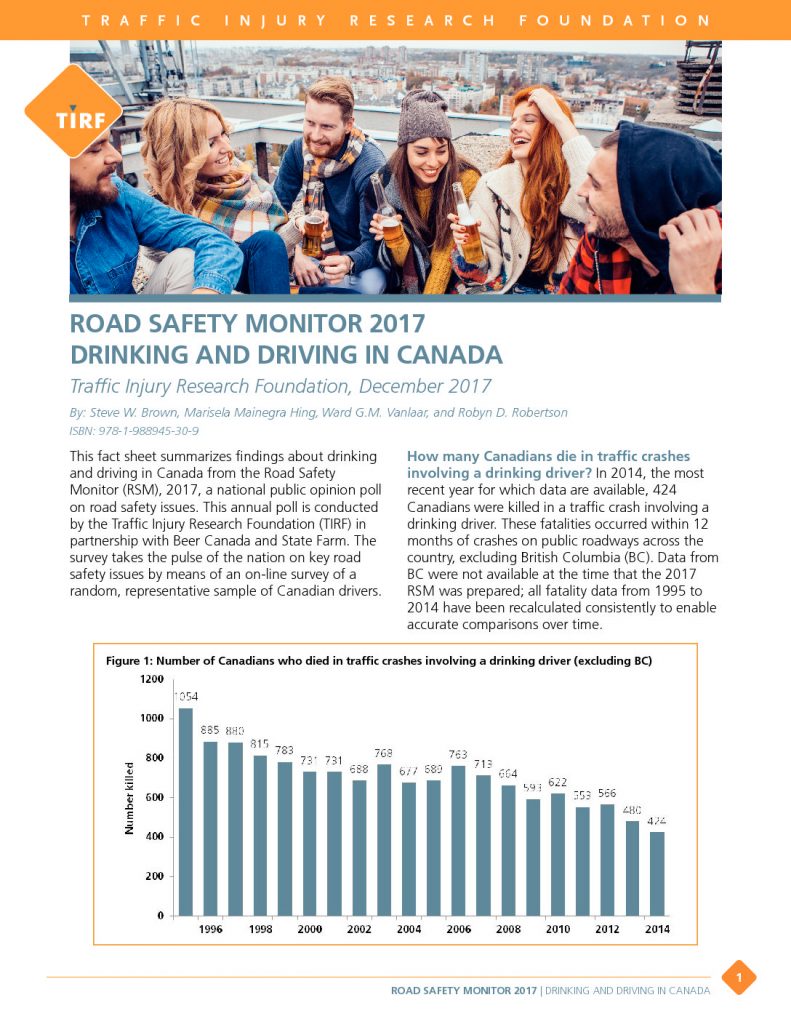 Ottawa, December 10, 2017 – The Traffic Injury Research Foundation (TIRF) is pleased to announce a new fact sheet that summarizes findings on self-reported drinking and driving in Canada. This fact sheet is based on the Road Safety Monitor (RSM) 2017 poll conducted by TIRF, in partnership with Beer Canada and State Farm®. The results indicate that while progress has been made to curb drinking and driving, continued attention and monitoring is needed to avoid losing ground.

Recent trends in the number of alcohol-related road deaths and the percentage of total road deaths that are attributed to drinking drivers in Canada (except British Columbia), indicate that progress in reducing drinking and driving has been achieved, at least until 2014, which is the most recent year for which fatality data are available. To illustrate, the number of Canadians who died in traffic crashes involving a drinking driver (excluding BC) was 424 in 2014, down from 1,054 in 1995. The percent of all traffic fatalities that involved a drinking driver (excluding BC) was 26.7% in 2014, which is the lowest since 1995, when it was 37.2%.

“However, since 2013, self-reported data on drinking and driving suggest that the proportion of drivers who engage in this behaviour is not decreasing,” cautions Ward Vanlaar, Chief Operating Officer of TIRF. “We are able to use the RSM poll results as an ‘early warning’ system and the data on self-reported driving after drinking suggest that the number of deaths may increase again without concerted effort”.

One way to address the drinking and driving problem is targeted messaging to educate the public. “Our data have consistently shown over the years that many drivers who admit to driving after drinking do their drinking at the home of friends or family,” explains Steve Brown, Research Associate at TIRF. “While overall Canadians remain concerned about this issue, many may not realize that drinking in those settings before driving can be as problematic as drinking in bars, at parties or in restaurants before driving.”

Brown concludes, “Our data show that progress has been made but TIRF will continue monitoring this issue to ensure we have good data to support effective countermeasures.”

About the poll:
These results are based on the RSM, an annual public opinion poll developed and conducted by TIRF. A total of 2,018 Canadians completed the poll in September of 2017. Results can be considered accurate within plus or minus 2.2%, 19 times out of 20. The majority of the questions were answered using a scale from one to six where six indicated high agreement, concern, or support and one indicated low agreement, concern or support. Similar to 2014, 2015 and 2016 all of the respondents completed the survey online.