Ottawa, ON December 17, 2020 – The Traffic Injury Research Foundation (TIRF) announces the release of a new fact sheet revealing declines in self-reported drinking and driving, Road Safety Monitor 2020: Drinking & Driving in Canada. The Road Safety Monitor (RSM) is an annual public opinion poll conducted by TIRF and co-sponsored by Beer Canada and Desjardins. The report also includes crash data from TIRF’s National Fatality Database. It shows significant progress has been achieved in Canada to combat drinking and driving based upon recent trends in the number of alcohol-related road deaths as well as the percentage of total road deaths attributed to drinking drivers. 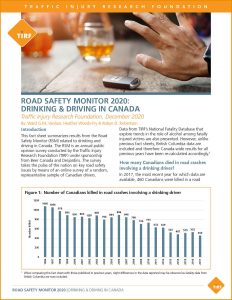 In 2020, polling data indicate 7.5% of Canadian drivers admitted driving when they thought they were over the legal limit in the past 12 months compared to 8.6% in 2019, representing a 12.8% decrease. But, while fewer Canadians self-report this behaviour in 2020, it remains to be seen whether this decrease is a result of lower traffic volumes due to COVID-19 or whether this signals the beginning of an overall downward trend in drinking and driving. Of concern, the percentage of drivers admitting this remains among the highest reported rates since 2004.

The role of alcohol in fatal road crashes remains a top road safety priority despite data showing the 57% decrease in the number of Canadians killed in road crashes involving a drinking driver between 1996 and 2017. An examination of trends showed two consecutive increases in this number in 2015 and 2016 followed by a 13.5% decrease to 460 in 2017. So, while the decrease in the percentage of Canadians who reported driving when they believed themselves to be over the legal limit decreased in 2020, more data is necessary to see if this is the beginning of a declining trend.

“The COVID-19 pandemic significantly impacted the choice of drinking locations among Canadians. Results showed 29.9% of respondents reporting they most often consumed alcohol at their own home in 2020, which is a significant increase from the 21.9% of respondents who reported this in previous years,” says Ward Vanlaar, TIRF Chief Operating Officer. “It remains to be seen whether this increase represents a general shift in behaviour or whether it is solely due to the pandemic.” In addition, there were significant declines among those who reported drinking at a bar (11.9%) and who reported drinking in a restaurant (12.9%) in 2020, compared to an average of 17.7% and 16.8% respectively for these behaviours between 2017 and 2019.

Although the full effect of COVID-19 on road safety in general, and alcohol-impaired driving specifically remains unknown, these data suggest some drinking and driving behaviours have changed as a result and it’s important to understand what factors contributed to this change. The reported decrease in this dangerous behaviour is positive, but it is unclear which population of drivers actually increased their risk-taking as it may not be the same drivers who reported doing this prior to the pandemic. The answer to this question will greatly influence preventive messages in the longer term. Additionally, the new normal necessitates prevention and enforcement strategies to reduce alcohol-impaired driving are adapted accordingly.

These results are based on the RSM, an annual public opinion poll developed and conducted by TIRF. A total of 1,500 Canadians completed the poll in September of 2020. Results can be considered accurate within plus or minus 2.5%, 19 times out of 20. The majority of the questions were answered using a scale from one to six where six indicated high agreement, concern, or support and one indicated low agreement, concern or support. 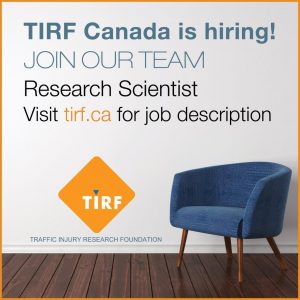