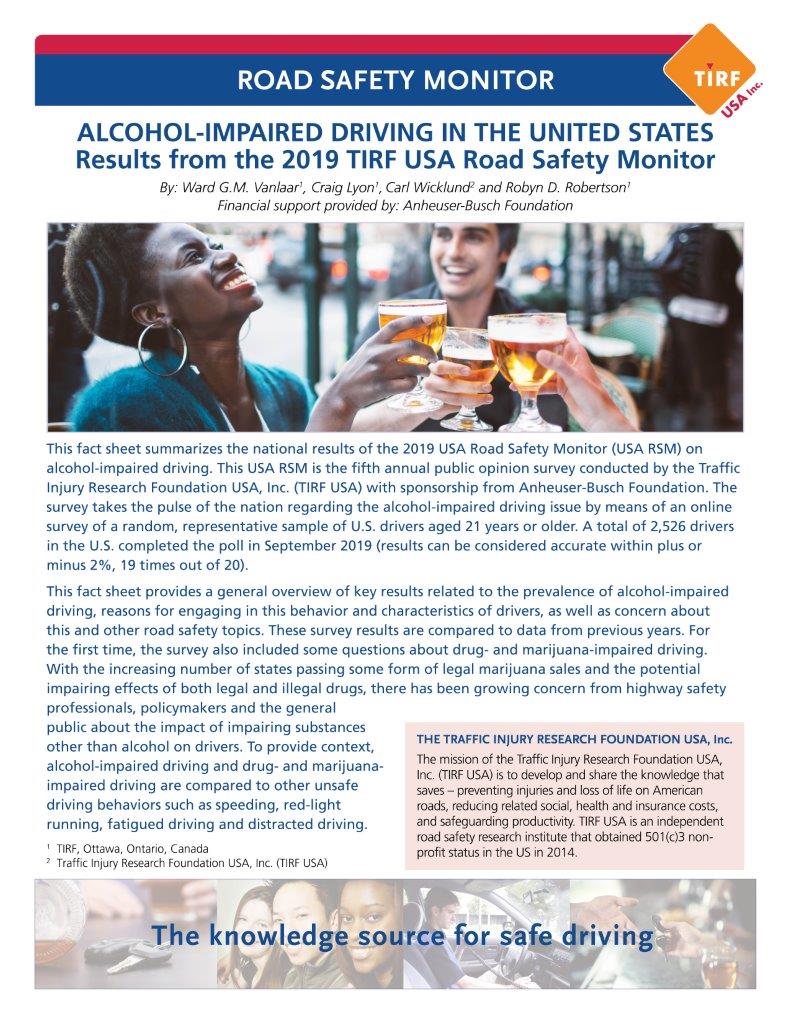 Washington, DC, December 27, 2019 — The Traffic Injury Research Foundation USA, Inc. (TIRF USA), in partnership with TIRF in Canada and with sponsorship from the Anheuser-Busch Foundation, released the fifth annual Road Safety Monitor (RSM) on alcohol-impaired driving. The survey takes the pulse of the nation regarding the alcohol-impaired driving issue by means of an online survey of a random, representative sample of U.S. drivers aged 21 years or older. A total of 2,526 drivers in the U.S. completed the poll in September 2019. This fact sheet provides a general overview of key results related to the prevalence of alcohol-impaired driving, reasons for engaging in this behavior and characteristics of drivers, as well as concern about this and other road safety topics.

The number of alcohol-impaired driving fatalities continues to decrease for the second time in a row, which is indicative of progress achieved. According to crash data from the National Highway Traffic Safety Administration, the number decreased from 10,996 deaths in 2016 to 10,908 in 2017 and 10,511 in 2018, meaning hundreds of lives were saved in the past two years. Other positive trends include the increase in the number of drivers stating they relied on safe rides as an alternative strategy to avoid alcohol-impaired driving.

Carl Wicklund, TIRF USA senior research advisor is encouraged with this trend, noting, “The number of drivers indicating they had been a designated driver, used a designated driver, used a taxi or public transportation or ridesharing rose from 177 million drivers in 2017 to 187 million in 2019.” In light of this increase, the belief there are no alternatives may simply be an excuse, at least by a subgroup of impaired drivers. “Understanding who is at risk for alcohol-impaired driving, and the conditions leading to this behavior, is important to ensure people have access to safe rides,” explains Wicklund.

Results of this RSM also show that the percent of respondents who reported driving when they thought they were over the legal limit in the last 12 months significantly increased from 11.6% in 2018 to 20% in 2019. This is the highest prevalence reported during the past five years of data collection. Additionally, the percent of respondents that reported driving impaired often or very often was also the highest reported during the past five years with a significant increase from 3.4% in 2018 to 11.1% in 2019.

The public would appear to be supportive considering 60% of U.S. drivers reported that they were very or extremely concerned about alcohol-impaired driving in 2019. In addition, second only to texting and driving which 84% of U.S. drivers think is the most serious problem, alcohol-impaired driving reported as a serious road safety problem increased to 78% in 2019, up from 74% in 2018.

Regarding marijuana use and driving, public awareness is often characterized by misperceptions due to the complexity of the science about its impairing effects as well as the challenge in conveying this information. RSM results found that 58% of respondents perceive marijuana/THC-impaired drivers to be a serious problem. Furthermore, 53% perceive driving after consuming or vaping CBD/cannabidiol to be a serious problem, even though its impact on crash risk is not fully understood with the available evidence. Misperceptions and misunderstandings about the impairing effects of marijuana on driving can have a direct impact on the rates of marijuana-impaired driving and marijuana-impaired crashes.

“More research is needed to better understand the complexities of the science, as well as targeted educational strategies and increased awareness campaigns about the effects of both alcohol and marijuana impairment,” concludes Vanlaar.

About the poll. These results are based on the 2019 TIRF USA RSM, an annual public opinion survey developed and conducted by TIRF USA, in partnership with TIRF in Canada. A total of 2,526 drivers in the U.S. completed the poll in September 2019 (results can be considered accurate within plus or minus 2%, 19 times out of 20). The data were stratified and weighted by sex, age, and region. The majority of the questions were answered using a scale from one to six where six indicated high agreement, concern, or support and one indicated low agreement, concern, or support, as well as numerous yes/no questions. All respondents completed the survey online.

About TIRF USA. The mission of the Traffic Injury Research Foundation USA, Inc. (TIRF USA) is to develop and share the knowledge that saves – preventing injuries and loss of life on American roads, reducing related social, health and insurance costs, and safeguarding productivity. TIRF USA is an independent road safety research institute that obtained 501(c)3 non-profit status in the US in 2014 and is affiliated through an exchange of services agreement with TIRF in Canada, established in 1964. Visit us online at www.tirf.us or twitter.com/tirfusainc