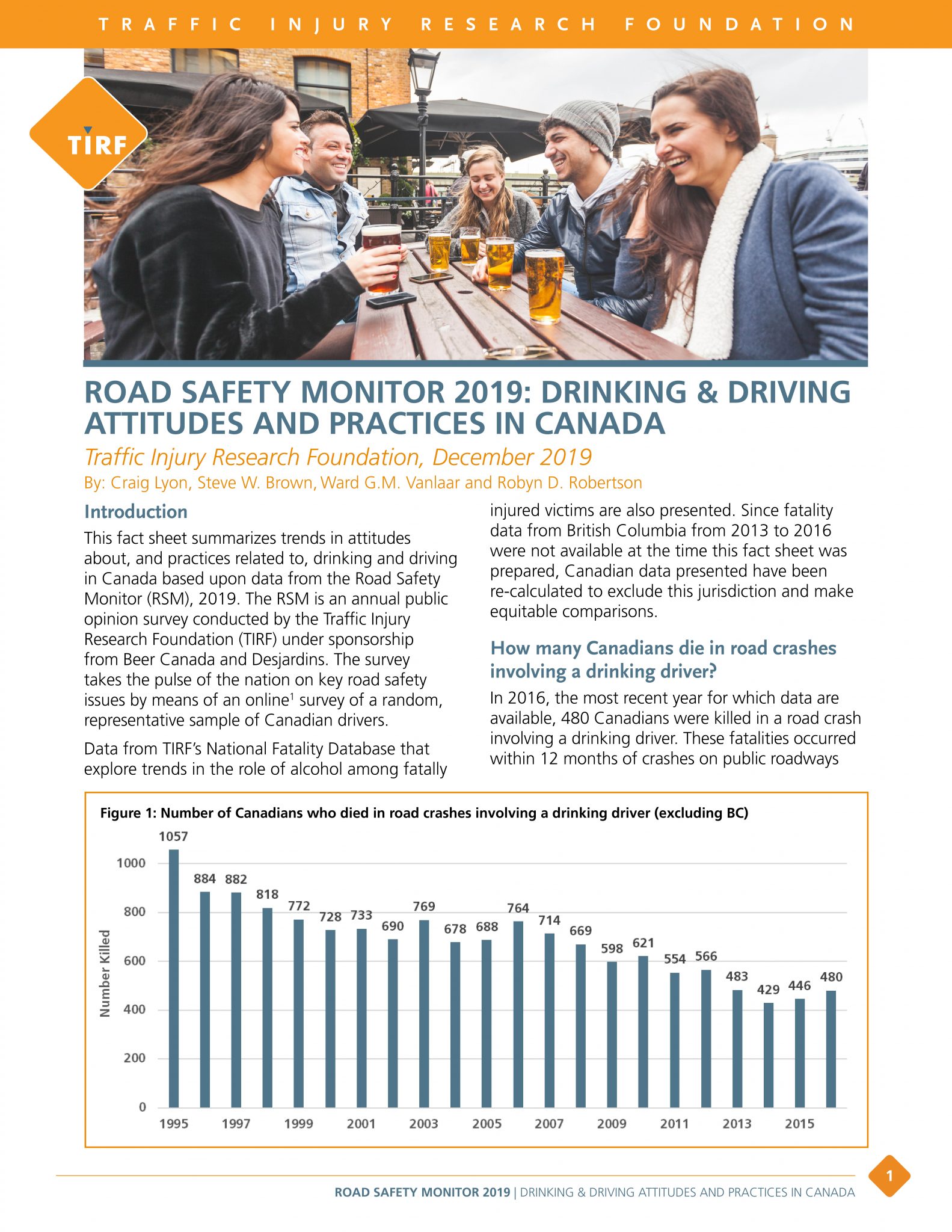 Ottawa, December 20, 2019 – The Traffic Injury Research Foundation (TIRF) announces the release of a new fact sheet, Road Safety Monitor 2019: Drinking & Driving Attitudes and Practices in Canada, which summarizes findings on self-reported drinking and driving in Canada. This fact sheet is based on the Road Safety Monitor (RSM) 2019 poll conducted by TIRF, in partnership with Beer Canada and Desjardins. The results show progress to reduce drinking and driving in Canada is slowing down.

In 2016, the most recent year for which data are available, 480 Canadians were killed in road crashes involving a drinking driver, a 55% decrease from 1,057 in 1995. These fatalities occurred within 12 months of crashes on public roadways across the country (excluding British Columbia). Despite this substantial decrease, there have been two consecutive increases in fatalities in recent years, from 429 to 446 in 2015 and to 480 in 2016.

“Despite progress since 1995, the two consecutive increases in the number of fatalities in the last two years is concerning,” says Ward Vanlaar, Chief Operating Officer of TIRF. “While the 480 deaths recorded in 2016 is much lower than years prior to 2014, self-reported data on drinking and driving when potentially over the legal limit from 2017 forward indicate that this number might increase.”

This 2019 poll also shows concern among Canadians is increasing, with 74.7% of respondents citing drinking and driving as an issue of concern on the public agenda, the highest percentage of any societal issues presented to respondents. Continuing increases in drivers admitting to driving when they thought they were over the legal limit in 2017, 2018 and particularly 2019 when 8.6% of the Canadian driving population admitted to this behaviour, indicate these concerns are warranted.

While there is no perfect correlation between self-reported drinking and driving behaviour on the one hand and alcohol-related crashes on the other, an increase in alcohol-related crashes might occur following an increase in the proportion of drivers admitting to driving while they thought they were over the legal limit. Steve Brown, TIRF Research Associate concluded, “Continued monitoring is necessary to see which way the trend is going and to inform efforts to reduce this burden on our society.”

About the poll:
These results are based on the RSM, an annual public opinion poll developed and conducted by TIRF. A total of 1,200 Canadians completed the poll in September and October of 2019. Results can be considered accurate within plus or minus 2.8%, 19 times out of 20. The majority of the questions were answered using a scale from one to six where six indicated high agreement, concern, or support and one indicated low agreement, concern or support. Similar to surveys conducted from 2014 to 2018, all of the respondents completed the 2019 survey online.